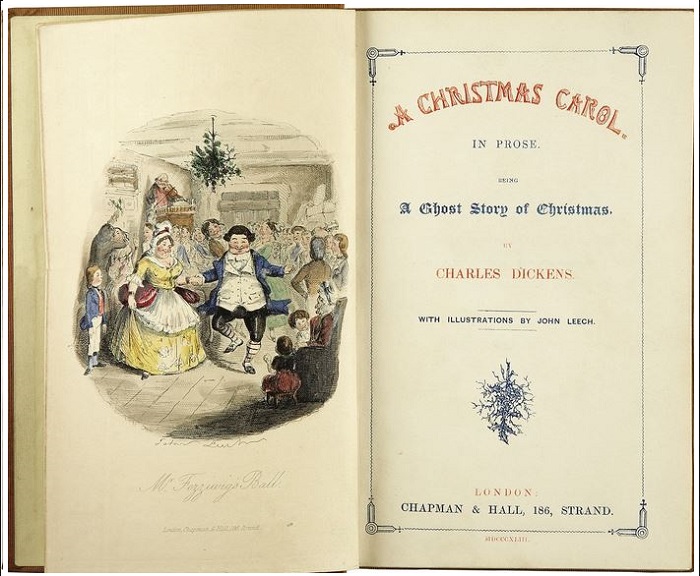 How Charles Dickens Redeemed The Spirit Of Christmas

Though today regarded as the literary titan of the Victorian age, in late 1843 the 31-year-old Charles Dickens worried that his popularity was fading. His latest novel was not selling well, his finances were strained and his wife was pregnant with their fifth child.

Dickens had recently visited the industrial city of Manchester, an experience that left him deeply moved by the plight of the poor. He understood their circumstances on a personal level – as a boy, Dickens had been humiliated when his father was forced into debtors’ prison.

Initially intending to voice his concerns about the poor as a pamphleteer, Dickens instead crafted a story about the redemption of an old miser, believing that it would garner more public attention and support.

Today that story remains perhaps Dickens’ most celebrated work, A Christmas Carol. Adapted in many forms, it has never been out of print. I take students in my course on philanthropy to see a stage production of the work each Christmas season.

The story begins on Christmas Eve. The “grasping, scraping, clutching, covetous old sinner” Ebenezer Scrooge is toiling in his office, where he turns away two fundraisers seeking to provide for the poor, rudely rebuffs his nephew Fred’s invitation to Christmas dinner and berates his underpaid clerk, Bob Cratchit, for expecting to get Christmas Day off with pay.

At home that night, Scrooge is visited by the ghost of his partner Jacob Marley, who “died seven years ago, this very night.” Now wandering the earth dragging heavy chains forged by his own avarice, Marley warns Scrooge that he will meet the same fate if he does not listen to the three spirits who will visit him during the night.

The first of the spirits, the Ghost of Christmas Past, takes Scrooge to scenes from his earlier life, where he is reminded that he was once a kinder and gentler person.

At his old school, he reexperiences what it is like to be lonely at the holidays until he is rescued by his sister. He then visits the holiday party of his employer, Mr Fezziwig, who despite modest means embodies the spirit of celebration.

He then sees his younger self with his fiancée Belle, to whom he intended to devote the rest of his life, until he was gradually overmastered by the love of money. Belle eventually breaks their engagement and marries another man, whose large and happy family Christmas the ghost takes Scrooge to witness.

The Ghost of Christmas Present whisks Scrooge to celebrations of Christmas in different settings throughout the land. They then travel to the home of Fred, who valiantly defends his uncle against criticism, choosing to pity rather than condemn him. Then Scrooge finds himself at the modest holiday feast of the Cratchit family, where he meets Tiny Tim, their ailing youngest child, and learns that unless the course of events changes, this will be the boy’s last Christmas. Finally, the ghost shows Scrooge two starving children, Ignorance and Want, mocking Scrooge’s expressions of concern with his own words from earlier in the day, “Are there no prisons? Are there no workhouses?”

The ghost of Christmas Yet to Come transports Scrooge to the holiday one year later, where he witnesses the reactions of various people to the recent death of a “wretched man.” A businessman states that he will attend the funeral only if a lunch is provided, and various people sell stolen items from the dead man’s estate to a fence. The only people who feel any emotion at his passing are debtors who now have more time to repay their loans. After returning to the Cratchit home, where Scrooge sees the family mourning the passing of Tiny Tim, he is taken to a neglected grave, where to his horror, he sees the name Ebenezer Scrooge.

Awakening on Christmas morning, Scrooge realizes there is still time to act. He sends a prize turkey to the Cratchits, gives Bob a raise and becomes a “second father” to Tiny Tim. Once a miserable old miser from whose heart “no steel had ever struck out generous fire,” Scrooge becomes “as a good a friend, as good a master, and as good a man, as the good old city knew.” Some laughed at the alteration in him, but he was happy to let them laugh, “and it was always said of him, that he knew how to keep Christmas well, if any man alive possessed the knowledge. May that be truly said of us, and all of us. And so, as Tiny Tim observed, God bless us, every one!”

The wonder of an open heart

A Christmas Carol is a tale of redemption. Scrooge is blessed by a series of spiritual visitations that enable him to obey the Socratic injunction, “Know yourself,” from multiple different spatial and temporal points of view.

Having glimpsed in so short a time the course of his whole life, Scrooge is able, for the first time, to perceive its true trajectory. He realizes that, despite his growing wealth, his greed is alienating everyone around him, making him a boon to no man and a curse to many. Hoping against hope to write a different final chapter, Scrooge embarks on a new life.

In attempting to capture a new spirit of Christmas, Dickens reminds us of the power of the past and the future to change the way we see the present. In confronting Scrooge with the stark contrast between the spirit of generosity in his youth and the isolated, desolate circumstances of his death, Dickens invites readers to contemplate our own life trajectories and begin redrafting our own eulogies while there is still a chance to make changes. Perhaps we, like Scrooge, can rediscover the wonder of an open heart, recognizing that warmth and vitality lie not in the accumulation of wealth but in the dedication of time, talent and treasure to others.

Some historians credit Dickens with helping to establish many of the patterns that mark the contemporary observance of Christmas. Some two centuries before, Oliver Cromwell had attempted to refocus the holiday away from elaborate celebrations to a time of strict piety and prayer.

In Dickens’ hands, however, Christmas is restored to a time for gathering with family, celebrating the spirit of generosity, and feasting. Above all, the Christmas season is an opportunity to tune in to a higher frequency and to lend our voices to the chorus chanting one of the oldest and best tunes of all – the song of love’s redemptive power.

Published in BOOKS and TOP FOUR