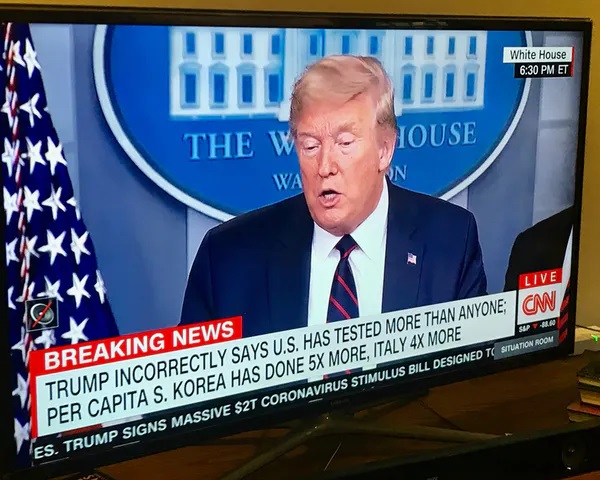 Aiming for novelty in coronavirus coverage, journalists end up sensationalizing the trivial and untrue

For centuries, what has made news valuable and news organizations profitable has been the speed at which journalists collect and disseminate information.

This is useful for both commerce and public service. But the rush for novelty can prioritize sensationalism over depth, and elevate the newest tidbit of information over more important reporting.

Examples of this include reporting on such unimportant and inconsequential tweets by President Donald Trump as his bizarre accusation that a morning cable TV host murdered somebody, or his pride in the ratings for his pandemic press conferences.

When novelty replaces context, the ironic result is a less-informed but more up-to-date public.

This is particularly true in times of long-running historical events, such as the current pandemic.

When a clear beginning, middle and resolution are not discernible, the demand for any morsel of new information can confuse, rather than clarify, the story.

Journalists rushing to amplify any small update can mistakenly inflate its importance with sensational headlines or hyperbolic broadcast framing.

For example: the widespread discussion of hydroxychloroquine as a miracle cure – it wasn’t – or the celebrated roll-out of the CDC’s guidelines for a safe reopening of the economy, now appear, in retrospect, to be relatively insignificant, especially because numerous states are reopening without following the CDC’s recommended metrics.

Faded in memory now are things like the announcement of Google’s tracking website, and the national drive-through testing plan, both of which never materialized but resulted in major headlines and widespread discussion in the wake of their announcement.

Traditionally, editorial news assessment of presidential assertions was simple: if the president said something, it was, by definition, newsworthy.

Yet the COVID-19 pandemic has revealed how journalism’s traditional bias for novelty can result in front-page, top-of-the-broadcast news stories that are provably inaccurate, and even occasionally fictional. The tendency of journalists to inflate the value of certain new information makes the media manipulable and easy to exploit.

President Trump realizes this. That’s why he tweets so much. He understands the content of any tweet is less important than its immediacy, and how his tweets pressure journalists to amplify unimportant messages on social media.

He knows that what he actually says in a tweet is less important than that there’s a new tweet – and how such newness motivates journalists to redirect focus from ongoing problems that lack new developments to the tweet itself.

Lost in this confusing swirl is repetition’s power. News organizations find little value in republishing, or rebroadcasting, news everyone already knows. The goal for journalists has long been known as “advancing the story.”

But sometimes the biggest story does not advance as quickly as journalists might hope. It is in these moments of seeming stasis that journalistic repetition can become more powerful and serve as a way to hold government accountable.

Here’s one example: The states around the country that have moved to reopen their economies without achieving benchmarks proposed by the CDC. There are indications in Texas, for example, that this is resulting in increased spread of COVID-19.

This isn’t a one-day story; nor is the news simply the opening of these states. The White House’s own “Opening Up America Again” guidelines are public, easily accessed and could be continually referenced in stories about safely reopening the economy. Doing so would provide important context for the public about national and state leadership.

If the guidelines turn out to be wrong, that would offer important information about the CDC and the White House. If they turn out to be correct, decisions to deviate from them will similarly provide valuable information to the citizenry.

Yet journalism’s avoidance of repetition can be viewed as detrimental to this public education mandate. That the president has provably misled the media and the public with such regularity during the COVID-19 pandemic seems to be “old news” at this point.

The imperative for “new” news deters reminders in the lead paragraphs in newspaper articles, or at the top of news broadcasts, that much of what the president has said and tweeted about the pandemic has been inaccurate and disproven.

ABC’s lucrative “Nightline” franchise was born out of a series of nightly updates – often about the lack of progress – during the Iran hostage crisis of 1979-1980.

Daily coverage of the O.J. Simpson trial in 1994-1995 raised cable TV news ratings and profits to record levels and sparked national conversations about race, celebrity and the justice system.

And now the COVID-19 crisis has catapulted ABC News’ “World News Tonight” to the top spot in the national TV ratings for weeks. Viewership data proves the U.S. public is avidly following the story.

Journalists, however, seem to be tiring of it. Like body counts in Vietnam, days the hostages remained in Tehran or the number of positive COVID-19 tests, reciting dry numbers requires little effort.

Reporting something different now, Hayes added, was, “in a weird way, liberating, because it means you don’t feel beaten into the ground by repetition.”

Using the word “liberating” implies that Hayes, and other journalists, are feeling entrapped.

Yet, rather than complain, they might consider this a professional challenge. When body counts bored reporters in the Vietnam War, they went into the field to add irony, wit and emotion to their reports. Journalists like Peter Arnett, Jack Laurence and Morley Safer composed distinctive and powerful stories capturing the mood and atmosphere in Vietnam.

Many unexplored angles on the COVID-19 epidemic await creative treatment. But they require imagination, skill and the investment of time, patience and money to produce.

News isn’t always what’s new. Sometimes it’s the barely perceptible moments that tired journalists might overlook. Failure to capture and communicate those stories, because they might not contain the most recent morsel of information, could have political consequences today, and could misinform historians portraying this pandemic tomorrow.