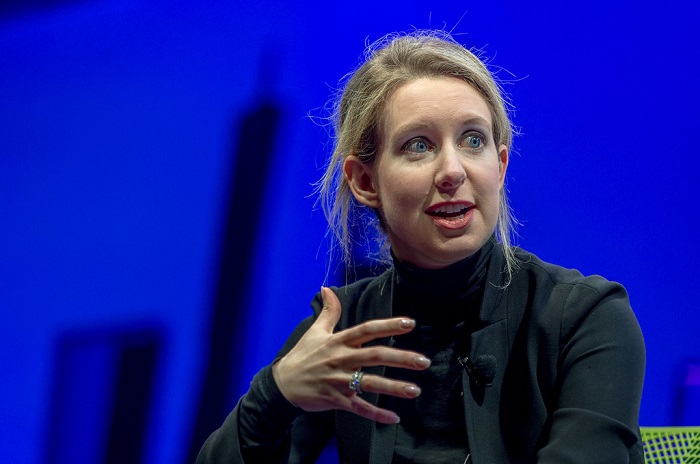 Did Elizabeth Holmes Intentionally Lower Her Voice? What’s Behind The Obsession

There is a scene in Hulu’s new series, “The Dropout,” where Theranos founder Elizabeth Holmes, wearing a white blouse, stands in front of a mirror and practices saying, “This is an inspiring step forward.” With each iteration, her voice deepens.

As the world has learned about Theranos’ web of deception – whether through John Carreyrou’s bestselling book, “Bad Blood,” Apple’s podcast series “The Dropout” or Hulu’s streaming series of the same name – Holmes’ supposed attempt to alter her voice is a detail that captivates audiences. The behavior might strike some people as bizarre, even sociopathic.

But because of my training in vocology, the study of vocalization, and my interest in speech biases, I’m intrigued by why Holmes may have felt compelled to change her voice in the first place. I see the story of her voice as part of a broader cultural fixation on the way women speak and sound.

Whenever Holmes is in the news, some questions always come up:

What’s with that distinctively low voice? Is she faking it?

I have not been able to find definitive proof, in the form of video or audio recordings, to show that Holmes’ voice is noticeably different in its current form than at some previous time.

However, it could have been easily edited. And dramatic, sustained pitch changes in speech can be associated with heightened emotional states without indicating a put-on voice. At the same time, people who know Holmes have claimed that she changed her voice in order to cultivate a persona as a Silicon Valley wunderkind.

Only a clinician like a laryngologist can make a voice-related medical diagnosis. But since I can’t definitively answer if Holmes’ voice changed intentionally, it is worth considering what natural or medical processes could cause a similar effect. Hormones directly impact the voice, including pitch and the perception of roughness or hoarseness. Women’s voices tend to decrease in pitch range during menopause.

Holmes’ young age at the time she became known for her voice may rule out an age-related hormonal voice change, but a similar effect could be found with certain hormone therapy. There are also several voice disorders that impact pitch range.

There are all sorts of reasons people seek voice therapy or coaching to address vocal insecurities. Whether they’re concerned about their voice range or simply seeking skills to become better communicators, the voice is resilient and can be developed with training. There are also wonderful resources available for gender-affirming voice support for transgender people.

So what is the physiological process at play when someone intentionally lowers their voice?

Engaging a tiny laryngeal muscle called the thyroarytenoid causes the vocal folds, which are housed inside the larynx (or “voice box”), to relax and become shorter and thicker. Imagine decreasing tension on a rubber band. These shorter, thicker folds vibrate at a lower frequency, resulting in a lower-pitched voice, just as a thicker or more lax guitar string has a lower pitch.

It is likely the singular nature of Holmes’ voice is related not only to its low pitch, but also its resonance, the unique tonal quality and placement of the voice. Holmes might adjust her resonance by consciously lowering the larynx. Doing so creates a longer space above the larynx, which boosts the deeper, darker tones in the voice.

In my role as a theatrical voice coach, I’m sometimes asked to help women actors lower their voices. I’ve encountered directors and producers with significant distaste for higher-pitched women’s voices, especially when this pitch range is combined with nasal resonance.

In movies and on TV, characters with high-pitched voices are often portrayed as comical, dim-witted and generally undesirable. Think of Lina Lamont, the character from “Singin’ in the Rain” memorably played by Jean Hagen. Her high, piercing voice became a source of consistent laughs.

Might sexist attitudes about women’s voices cause women in leadership roles to feel pressured to adjust their pitch range down?

Former British Prime Minister Margaret Thatcher, nicknamed the “Iron Lady,” famously down-shifted her voice to burnish her stature. Research on perceptions of pitch in women’s voices shows higher ones are associated with physical attractiveness, while lower voices are associated with dominance.

Meanwhile, many women radio and podcast hosts are barraged with negative listener feedback about “vocal fry,” the creaky mode of speaking made famous by Kim Kardashian.

Yet physiologically, to create this sound, the vocal folds must vibrate at a low frequency, associated with low pitch. This much-maligned vocal feature is at one end of the pitch spectrum. But there’s another equally hated speech feature that is achieved at the other end: the high-rising terminal intonation pattern, or “uptalk.” This feature is noted for the dramatic upward pitch at the end of each thought, which can make statements sound like questions.

The insistence that women in media change the pitch of their voices often comes with little concern for the anatomical and physiological factors that will limit how much pitch change is ultimately possible. My current research is investigating perceptions of women’s speaking voices in the performing arts and considering whether it’s time to part ways with some old aesthetic preferences.

Either way, the delicate dance of trying to strike a happy medium – the Goldilocks voice profile, where one can be taken seriously as a leader without being perceived as inauthentic, grating or patronizing – seems to be elusive. Women’s voices are the subject of endless scrutiny at both ends of the range – it seems they just can’t win.

If everything about this story were the same except the gender of Theranos’ CEO, I wonder whether his voice would even be remarked upon. If it were, might the same vocal qualities be perceived as positive traits befitting a capable, serious-minded leader?

Elizabeth Holmes undoubtedly lacks the practical skills and moral compass to be a great leader. But all the noise about her voice, and the potential that she changed it to get ahead, just may reveal a sexist double standard that women seemingly can’t escape.

Published in MONEY and VIDEO REELS