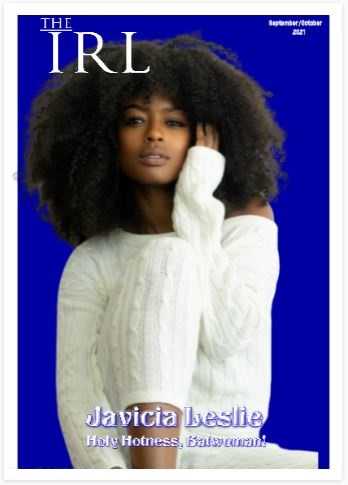 The Luscious And Juicy Javicia Leslie – Our Sepember-October Cover Star

Javicia Leslie was born in Augsburg, Germany and raised in Maryland before growing up — and out! — into an ultra-alluring actress best known for ravishingly embodying Ryan Wilder in the sex-sopped CW superhero series Batwoman. Holy hotness, Batwoman! Before making Gotham City skinfinitely sexier and more gorgeous by way of Batwoman, Javicia Leslie mam-morably raised the temperature with her presence on other boob tube productions such as the series God Friended Me, MacGyver, Kat, Hello Cupid Reboot, Broke & Sexy, and Chef Julian, as well as the TV-movies Swim at Your Own Risk (2016) and Prototype (2016).

Skinterestingly, Javicia Leslie made her onscreen debut in the short film MuSicktuation (2010), and she has since sexed-up other shorts such as Nevaeh (2017), Pas Honteux (2018), and First Day Back (2019), in addition to the features Always a Bridesmaid (2019) and Roped (2020). This Teutonic knockout shows some major skin for her role as Paris Duncan in the TV series The Family Business. We get a great look at her toned tummy while she relaxes poolside in red bikini. Then she strips down into a tasty teddy for some sexy time with a lucky guy. Things get even kinkier in another scene when she undresses down to her black lingerie to bang a guy who is tied up! Post coitus (and after she shoots the guy! Oops.), we get one more look at her amazing cleavage while she holds her arm over her bare breast. We’d like to give this foxy Family Business babe the business!