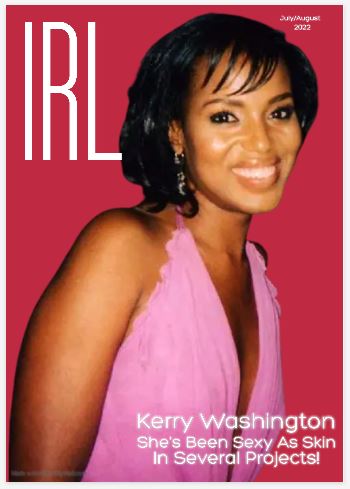 Spike Lee directed a spike into our pants the next year with She Hate Me (2004), as Kerry finally took off her top as a luscious lesbian enjoying some insemination antics. Surprisingly she ended up enjoying a bigger hit with her role in the Ray Charles bio Ray (2004). Kerry gave us a glimpse of her Sexual Life (2004) in the underseen indie, but her star rose with our zippers as Washington won over the multiplexes with roles in the summer hits Mr. and Mrs. Smith (2005) and Fantastic Four (2005), and returned to nude form in the Quentin Tarantino shocker Django Unchained (2012).

She’s been sexy as skin in several projects that didn’t necessarily show full skin, like her big cleavage in Little Man or her underwear-clad body in I Think I Love My Wife (2007). Yeah, forget our wives, we’re in love with Kerry! She went out in a bikini in an episode of Psych (2008), but before that she starred as Chelina Hall in Boston Legal (2005) which featured a few cleavage-heavy shots throughout the series. She similarly looked amazing in A Thousand Words (2012), but she didn’t show skin in that picture. She did show off her cleavage in a bikini in Lakeview Terrace (2008) which also had her looking skintastic in her underwear. In Mother and Child (2009) she was one hot MILF when she showed her breasts! Now that’s a hot mama. In The Dead Girl, she was really lively in a lesbian liplock and lingerie.

Then it was on to the boob tube for a lead role as professional “fixer” Olivia Pope in the hit series Scandal. Looking back at her filmography certainly fixes the problem in our pants!