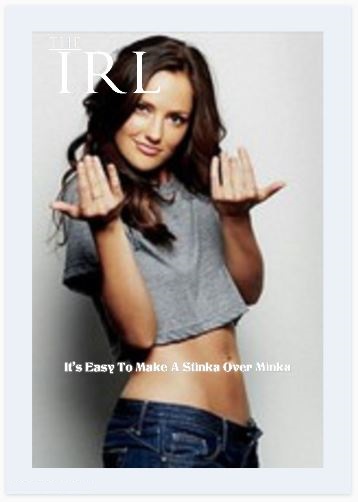 Minka Kelly the daughter of a Vegas showgirl and one-time Aerosmith guitarist Rick Dufay, the beautiful babe was blessed with talented genes and showbiz connections. Her modeling career led to commercials which had the gorgeous ingénue graduating to guest spots on television shows. Minka soon landed a main role on NBC’s hit drama Friday Night Lights (2006-2009).

As a randy cheerleader, her make-out marathons steamed up the small screen. The hottie also donned skimpy swimwear and sexy skivvies to ensure the ratings (among other things) went up! The pretty performer starred on NBC’s Parenthood (2010-2011) and the reboot of Charlie’s Angels (2011) before making her move to movies. She thrilled audiences in the thriller The Roommate (2011) and had them sit up straight for The World Made Straight (2015). In the film, she flaunts her bikini bod and has her breast fondled! Minka also got busy with Giovanni Ribisi during a bedroom scene in Papa Hemingway in Cuba (2016) which included a peek of her peak con nipple patch. Luckily, the biopic also showcased Ms. Kelly’s nude caboose when she goes skinny dipping. In fact, the skintastic act paid off with an Anatomy Award from Mr. Skin! Since then, the leading lady bounced back to the boob-tube for the superhero series Titans (2018-2019), wherein she shows her super-pokies. Alas, Minka let a body double expose “her” side breast and booty. So much for visual effects. Let’s hope to see more of Minka in the near future.