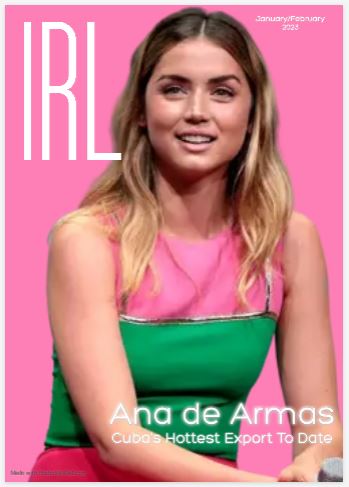 Latin SKINsation Ana de Armas somehow manages to be even more smokin’ than her Cuban homeland’s famous cigars, and that’s no small feat. Ana de Armas nude is Cuba’s hottest export to date, and what’s truly amazing is that she only seems to show more skin as the years pass. This isn’t always the trajectory for a Hollywood ingénue courting more serious roles, but Ana has been ably to marry her explosive sex appeal with critically buzzy roles. Her ever-expanding nudity résumé has something ever-expanding in our pants, so without further ado, let’s check out Ana de Armas’ boobs, butt, and almost everything in between in her staggering twelve nude roles! We’re talking everything from Ana’s nude debut in 2009’s Sex, Party and Lies to her amazing bathtub scene in 2015’s Knock Knock to her 2022 twofer – the dirty Ben Affleck movie Deep Water and of course, Ana de Armas Blonde – her most highly-publicized role to date!

How Did Ana De Armas Get Her Start?

An actress from the age of 14, Ana trained at the National Theatre School of Havana before appearing in her first feature, Una rosa de Francia, in 2007. One year later, at the age of 19, Ana moved to Madrid to further her career, a move that has brought her starring roles on the boob tube series The Boarding School and Mentiras y gordas. But if you’re looking to stroke your cigar to the alluring Ana, the breast place to start is her nipple scene in the soapy drama series Hispania, la leyenda, where she works up a sweat while getting it from a dude. In fact Ana is so sweaty that she drenches her thread-bare dress, and since she isn’t wearing a bra, we can see her awesome boobs shining through!

The Hits Keep On Coming

In Sex, Party and Lies (2009) it ain’t no lie to say that Ana’s booberific shower scene is simply Skintastic. In 2015 she starred in Keanu Reeves’s Knock Knock, where she plays a sinfully seductive stalker that gets naked during a sexy threesome. Don’t worry, that’s just your wood knocking. Her sex scene in the boxing biopic Hands of Stone (2016), featuring a clear shot of her breasticles as she rides the Panamanian legend, will have you polishing the obsidian until it screams “No mas!” She has since moved to Los Angeles where she starred in War Dogs (2016) and Overdrive (2017) which both featured her bikini body once again. In Blade Runner 2049 (2017) Ana plays a wig-wearing virtual girl whose billboard nudity makes us think the future is bright. She starred in the whodunit Knives Out (2019) but plays an unfortunately not very naughty nurse. Otherwise, it wouldn’t be knives we’d be pulling out when she came on screen.

Ana de Armas famous started dating Ben Affleck in 2020, the year that also happened to kick off her stunning nudity streak unrivaled by even the nudest of celebs. Erotic scenes in the Cuban spy film Wasp Network (2020) showcase nipples so hard they could pierce the skin, while a skinny dipping moment in The Night Clerk (2020) gives us a view clear enough to guess the water temperature. Watch that scene alone in your car and see how quickly it becomes a “Yank” tank! We were given a glimpse of the ham hock that makes up her sexual Cubano in the biographical drama Sergio (2020) when she gives us a butt shot while riding cowgirl on the United Nations diplomat. Ana joined the vaunted legacy of Bond girls when she appeared with some killer cleavage as CIA agent Paloma in No Time to Die (2021).

And then came 2022’s Blonde, where Ana embodies the most iconic sex symbol of them all, Marilyn Monroe – and body is what she gives with nine stunning and skin-tillating scenes! In fact this role is so graphic and unflinching that it’s almost like getting an Ana de Armas sex tape. But not quite. This much-discussed biopic earned a rare NC-17 rating for its many depictions of Marilyn suffering abuse at the hands of the men she encountered on her way to the top in Hollywood. But fear not! It’s not all doom and gloom if you can separate the movie magic from the artistry that is Ana’s bare bod. Despite the Ana de Armas controversy here we’re still more than willing to give these scenes a fair shake. In Blonde Ana has a threesome with two men, gets a good look at her own naturals in the mirror, poses for some sexy black and white pictures, and so much more. It’s a Marilyn role that will have you itching your seven inches!

Ana de Armas is the kind of celeb that keeps us doing what we do. She’s simply gorgeous from head to toe and uses her roles to celebrate her God-given good looks. Plus she has a fantastic and sexy personality to boot. Seriously, what can’t this woman do? With one of the greatest streaking streaks in celebrity history, we’ll have our eyes on this one for years to come. Of course, how could we take our eyes off her? You’d think with so many long looks at Ana’s perfect pair that we’d be more than satisfied, but we’re dying to see this Cuban coquette bare it all one more time. Ana will give you a big ol’ banana!