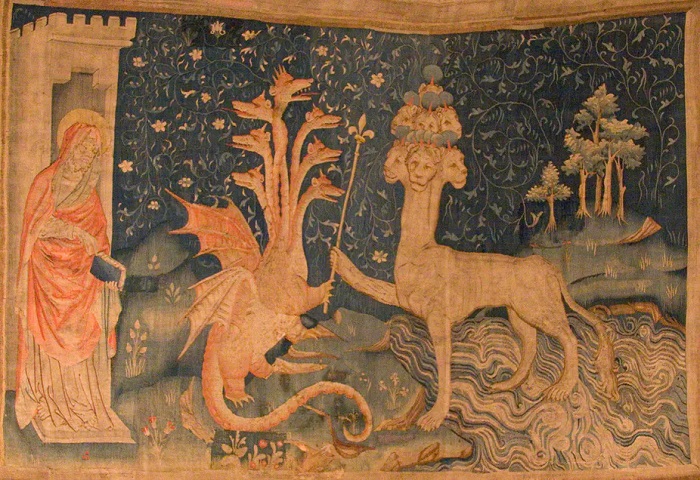 A First-Century Roman Tyrant Is Probably Linked To The Mark Of The Beast – But No, The COVID-19 Vaccine Is Not

The mass rollout of COVID-19 vaccines has led to concerns from some people that can be described as rational: What are the side effects? How effective will the shot be? And then there are those who are worried that the vaccine will brand people with the “mark of the beast” as described in the New Testament’s Book of Revelation.

The mark of the beast – a cryptic mark in Revelation which indicates allegiance to Satan – has been invoked by fringe Christian figures throughout the pandemic in reference to what they deem to be the evil of masks and vaccines. It ranges from the seemingly metaphorical likening of vaccine passports by a Republican House representative to something like “Biden’s mark of the beast” to the more literal interpretation that those getting a vaccine would be marked as followers of Satan.

It is tempting to dismiss such beliefs out of hand. After all, it is a fringe idea promoted by conspiracy theorists. But the idea has gained enough traction that some medical establishments have felt the need to address it head on. Minneapolis-based Hennepin Healthcare, for example, states in an online fact sheet that “the COVID-19 vaccines do not contain … The Mark of the Beast.”

As a scholar of early Christian literature, I would note that the mark of the beast in Revelation has throughout history been misunderstood as referring to various events and phenomena. Its connection to the COVID-19 vaccine is but the latest example of such misunderstanding.

Moreover, I argue that the mark in Revelation is best understood in the first-century context in which it was used, as a polemic against the Roman Empire.

The Book of Revelation is a complicated text. Written toward the end of the first century by an author who calls himself John, the text is filled with symbolic imagery that has mystified readers for centuries.

Using visions of angels and demons, death and destruction, John tells a story of an ongoing cosmic battle between good and evil that will end with good triumphing eventually. The beast and its mark are both understood by this author to be evil, and they are some of the most well-known and most misunderstood parts of his story.

In Revelation 13, John describes the beast as having seven heads and 10 horns, a leopard’s body, the feet of a bear and a lion’s mouth. The beast in this text is powerful, Satanic and is an object of worship.

There is also a second beast that promotes worship of the first. The most notable thing about the second beast is that it causes people to receive a mark on their forehead or right hand with “the name of the beast or the number of its name.”

John concludes this chapter with a riddle: “Let anyone with understanding calculate the number of the beast, for it is the number of a person. Its number is six hundred sixty-six.” (Rev 13:18).

The beast and the empire

Throughout history, this number has been used to demonize phenomena that readers are either wary of or don’t fully understand. It should come as no surprise, then, that some have tried to connect the COVID-19 vaccine to the mark in a similar way.

This interpretation is problematic, however, and for two reasons: First, the COVID-19 vaccines are modern phenomena that the author of Revelation and his earliest readers would have no familiarity with. Second, there is another explanation for the beast and its number that makes far more sense historically.

Many biblical scholars maintain that the first beast is a symbolic representation of first-century Roman emperors. In this reading, each head would represent one emperor. While there is some debate in scholarship on which specific emperors the author of Revelation is alluding to, there is fairly widespread agreement that Emperor Nero is one of them.

This conclusion is drawn not only from other references to Nero in Revelation, but also from his reputation in the first century for persecuting Christians in Rome.

In A.D. 64, when Nero was emperor, a great fire took hold in Rome and burned for nearly a week. Roman historians Suetonius, Cassius Dio and Tacitus claim that Nero himself was the one responsible for igniting the blaze, Tacitus adds that Nero attempted to free himself of blame by placing guilt on the Christians living in the city.

There are a number of other points in Revelation where the author seems to allude to Nero. There is a possible reference to the great fire of Rome later in the text, for example, in Revelation 17:16. John’s description of one of the beast’s heads being “wounded” may likewise be a reference to Nero’s death, which Suetonius describes as a self-inflicted stab to the neck.

But perhaps the clearest reference to Nero in Revelation is the infamous “666,” the number of the beast that constitutes the beast’s mark.

Although there has been much speculation over the number’s significance in the past, there is a growing body of scholars who believe it to be a direct reference to Nero.

There is a well-known practice in the ancient world called “gematria,” in which letters are assigned numerical values. This allows authors to refer to individuals by using “the number of their name,” rather than their actual name. And biblical scholars have long noted that in Hebrew characters, the numerical value of Nero’s formal title – Caesar Nero – is 666.

This, along with the other allusions to Nero in Revelation, leaves little doubt, I argue, as to who the author is referencing with this number.

There is, however, one piece of this riddle left, and that is what exactly the mark of the beast in Revelation is. Given the symbolic nature of the book as a whole, the reference to being marked on the forehead or hand is likely not something to be taken at face value.

More important is John’s claim that no one would be able to buy or sell anything without having the mark that bears the name of the beast. So, what does one need to buy and sell that would also have the name of the beast on it? One possible answer to that question is money – and we have numerous examples in the archaeological record of Roman coinage that bears the name Caesar Nero.

One of the reasons that Revelation is often confusing to those trying to interpret the book today is that they frequently are trained to see it as a book about the future, when in fact it is primarily a book about the past. Clearly, John and his first-century readers would have been able to know the answer to “What is the mark of the beast?” in their first-century context. Otherwise the text wouldn’t have made much sense to anyone when it was first written.

While some may have lingering questions about COVID-19 vaccines, the question of whether those vaccines are linked to the mark of the beast shouldn’t be one of them.