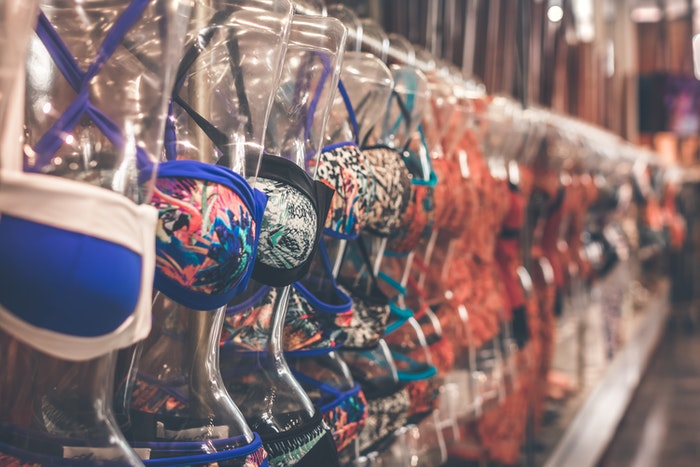 The Bra That Tried To Kill Me

At first it seemed like the one for me. It had cushy straps that seemed wide enough not to sever my shoulders. It had thick underwires strong enough for a space shuttle (but made for a woman… ).

It wasn’t very pretty, though, a characteristic that many of the “big” ones share. I wanted a pretty bra even though my husband’s opinion on bras is: “It’s what’s inside that counts”.

What I thought was the perfect bra made me feel supported, and I even looked a little thinner with everything in its place. I took really good care of it, hanging it up to dry like instructed on the care tag.

Then something happened. It started as just a little poke in the side, just under my arm. I ignored it at first, thinking I could just readjust. Every time I washed it and wore it, I would pull the wire back in further and further, the hole getting bigger each time.

Eventually, I was being simultaneously stabbed in the rib cage and in the armpit by a rogue piece of underwire. I fought with it, but the pervasive piece of load-bearing lingerie persisted, my ribs and armpit bravely defending themselves.

Every day we read about new scientific discoveries. Scientists have sent people into space. New drugs are designed to treat a plethora of disorders and ailments. Every time a new drug released on the market, we see the commercials that end with a mild-voiced narrator saying-through his teeth-that their drug “may cause… ” and then quickly rattles off a frightening list of side effects, it seems everything from high blood pressure to stigmata!

There are brilliant engineers who construct sophisticated bridges and overpasses, roller coasters, complex pieces of machinery, and large buildings able to withstand earthquakes!

Why has no one been able to develop the perfect bra? I know there’s a brilliant female engineer out there who has gotten up in the morning, put the girls in their place, and thought “there’s gotta be a better way!”.

Don’t get me wrong, I’m extremely thankful for modern scientific discoveries! And I’m not suggesting that bosom support is as important as curing illnesses. But if bright minds can come up with those little blue pills we all know about-thanks to those not-so-ambiguous commercials (bathtubs side by side and so on)-then why can’t someone figure out how to keep the girls in place without breaking your back, denting your shoulders, snagging everything else in the wash, or trying to kill us? And, if it’s not too much trouble, can someone at least make some of them pretty for those of us on the higher end of the cup chart?

I’m happy to say that, in the end, I beat the bra of terror. I used its own little worn area against it and yanked the murderous underwire right out! (Why WAS the underwire so sharp? Who thought to run it over a whetting stone before placing it in some poor, unsuspecting woman’s undergarment?).

It’s not the same, not quite as supportive. But at least I can wear it without fear of a punctured lung and having to explain it to the good people in the ER.

I am the underwire warrior!