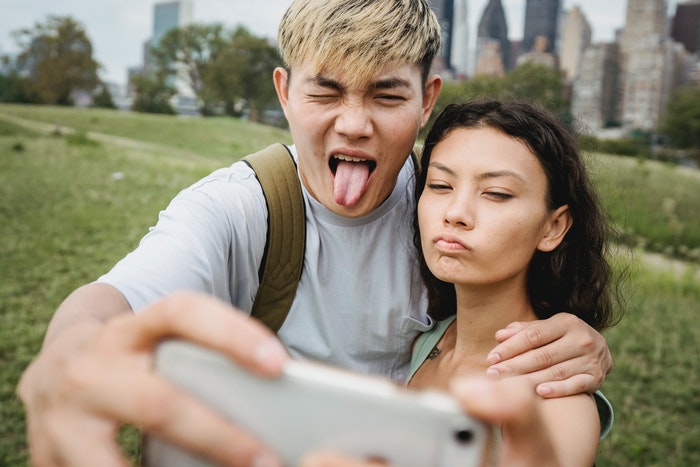 In the modern life, it is fashionable to name the latest trends and technologies with short and crisp words such as SciFi, HiFi and WiFi. The latest addition is the Selfie, which is a photograph of the self, taken by the photographer. It can be taken with a handheld digital camera or tablet or smartphone. Special sticks or stands to hold the smartphones are now available to facilitate better photos without the help of a third person. Selfies are often used for sharing on social networks such as Facebook, Twitter and Tumblr. Most of the selfies are taken with a camera held at arm’s length without a self-timer. In olden days, people used to photograph the self by uncovering the lens of the camera and running into the shot. Another method was to position the camera on a nearby object or on a tripod and capture the self-image reflected in a mirror.

There are two types of Selfies. When it contains only one person, it is an Individual selfie. If more than one person is captured in a selfie, then it’s called as ‘Group selfie.’ The latter is also known as ‘Groufie’, ‘Wefie’, and ‘Usie.’ Whatever is the type, the purpose of such selfies is to focus on the people in them. The most popular is the individual selfie which can be shared with close friends and relatives. Of late, Group selfies carry more value as they showcase the relationship and unity of people.

Benefits of Selfies: The need for a photographer is dispensed with. Personal images and varied expressions can be taken and shared with others. Such selfies are used for; 1) informing the position of self to the family that lives in a distant place. 2) Freezing the memorable moments 3) providing the evidence of being present in a place 4) sharing the status with the employer about the progress 5) fostering relationships and coordination.

Damages from Selfies: Many incidents of mishaps and loss of life per se due to the selfie craze are reported from around the world. An overdose of making perfect selfies is likely to cause the Body dysmorphic disorder. Psychological studies conducted in 2015 found the link between the number of selfies posted online, and narcissism was stronger among men than women. A person fell to death when trying to take a selfie with the backdrop of the city, by standing on the parapet on the terrace of the ten-storey building. Selfies with VIPs are used to promote business and influence in the market. Movement of traffic or pedestrians comes to a halt when some people take selfies in busy places such as road, railway stations and malls.

When a famous actor attended a funeral, some people made a rush to take selfies with the actor and the dead in the backdrop. Shame is on such uncivilized people. A couple slipped from a cliff edge and died while taking a selfie. A man accidentally shot himself in the head while taking a selfie with a loaded gun. One lady died from electrocution as she was capturing selfies atop a parked train. A college girl suffered a fatal head injury when she tried to take a selfie and fell from a moving train.

Some countries have launched the awareness and advisory campaigns to educate their citizens on the dangers involved in selfies. In Russia, mock road signs are placed to warn against unsafe poses, and the Russian Ministry of the Interior issued a ‘ Selfie safety guide ‘ that warns the selfie enthusiasts about some common dangerous behaviors. Selfies are good as long as people retain their self-consciousness and respect the feelings of others.

Author, an Ex-Banker with Masters in Agricultural Economics, publishes very useful and practical tips and ideas for happy life at his site http://www.mohanspage.com