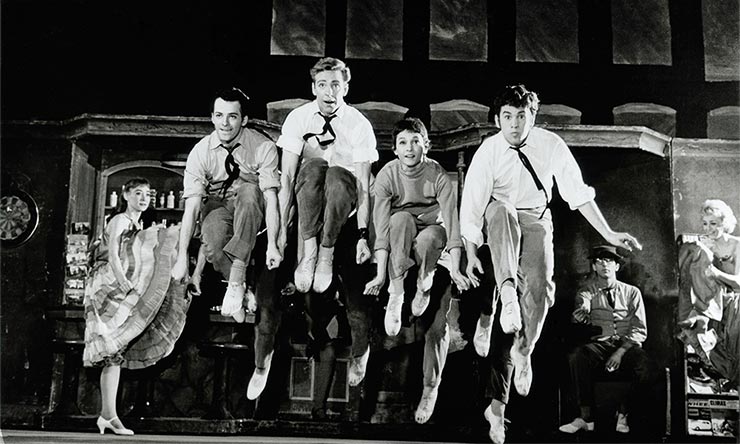 The songs are timeless, the casting contemporary and dance routines still daring.

But for social scientists like us, Steven Spielberg’s remake of the 1961 hit musical “West Side Story” – a film about two rival street gangs – is more than a 21st-century face-lift of a Broadway classic. Released in theaters on Dec. 10, 2021, it is an opportunity to consider societal changes in the six decades since Maria and Tony stole the hearts of audiences across the world – particularly in the world of gangs.

As scholars who have studied gang culture, we find that the soul of the street gang hasn’t changed much since the days of the Jets and the Sharks – but the world around them has. Demographics, economics, technology and public policy have reshaped and reshuffled gang life in America. So dramatic are the changes that the romanticized “West Side Story” characterization of gangs is now a relic of a bygone era.

Perhaps the biggest shift in gangs is skin-deep – urban white-ethnic neighborhood-based gangs like the Jets no longer really exist.

Ethnonational conflict among Italian, Irish, Jewish and Polish youth in cities like Boston, Chicago, New York and Philadelphia culminated with the end of mass migration from Europe in the early to mid-20th century. Many urban white people moved to the suburbs in the 1960s and, generally speaking, took their gangs with them. Today, when people think of the American street gang, they are more likely to think of Black gangs, like the Bloods and Crips, or Latino gangs, like the Nortenos and Surenos. White street gangs are located outside of urban areas and cast as domestic extremists such as the Proud Boys, Three Percenters and Skinheads.

The gang as an American enterprise

The gangs of the “West Side Story” era were often a normal yet fleeting aspect of adolescence, soon to be supplanted by work, marriage and children.

But in the 1970s and 1980s, globalization and industrial restructuring caused the well-paying, stable blue-collar jobs that young men in gangs were qualified for to largely disappear. Around this same time, gang involvement became more prolonged into adulthood and intergenerational within families.

This era also coincided with an increase in imported drugs such as heroin and crack cocaine. With the rise of the illicit drug economy, the gang itself became an institutionalized route to mythologized riches. Gang activity expanded throughout the country, emerging in the suburbs and even rural towns, leading to the most recent estimates from the National Gang Center of 31,000 gangs and 850,000 gang members.

The West Side goes digital

Gang life saw more changes with the emergence of the internet. The internet and social media were in the realms of far-fetched fantasy when “West Side Story” was made, but they now provide a repository for gang content, a blueprint for gang activity and a catalyst for gang conflict. A modern “West Side Story” would entail taunts on Twitter, fights over Facebook, and reliving the rumble on Reddit.

Word always traveled fast on the streets; “West Side Story” shows that well. But social media makes it faster, more public and more permanent. Gossip, taunts and threats are now broadcast to a much bigger social world – in some cases, with violent consequences.

Contemporary gangs “shoot it out” rather than “slug it out.” In the 1960s, there were several hundred gang homicides annually; now there are several thousand.

When compared with other homicides, gang-related homicides disproportionately involve the use of firearms. Firearms are far more prevalent and accessible now than when “West Side Story” was conceived. But what original “West Side Story” director and choreographer Jerome Robbins understood back in the 1950s still holds true: When guns and knives are present, pushing and shoving can escalate quickly into stabbing and shooting. The movie’s fateful knife fight dramatically illustrates this.

Gangs are a criminal justice priority

As gangs and violence proliferated in the decades after “West Side Story” first hit screens, the cure for the Jets’ self-diagnosis of “sociological sickness” has shifted from social work to suppression. Criminal justice is now the rule of the day. Beat police officers like Officer Krupke and Lt. Shrank have been replaced by gang unit officers and special investigators tasked with gathering intelligence and documenting and collating gang members in databases.

States also responded legislatively to gangs. California first passed its anti-gang laws in 1988, and 44 states have since followed suit. Gang membership and recruitment have been criminalized, while sentencing enhancements for crimes with a gang nexus have been controversially introduced.

In the days of “West Side Story,” gangs were not a significant issue in prisons. Since the onset of mass incarceration in the 1970s, prisons have become a vector for gang activity – around 15% of U.S. prisoners today are affiliated with gangs.

It is impossible to understand gangs in the 21st century without considering how the world around them has shifted. And while structural shifts in policy, population and technology clearly matter, what is perhaps the starkest change has little to do with the gangs themselves, but the way in which the general public and the legal system stigmatize the children within them. The average age of a gang member is 15 – these are kids who are trying to survive in the worst of circumstances.

If the gang was a rite of passage when Riff and Bernardo roamed the streets of New York City in “West Side Story,” the reality of the contemporary gang has become much bleaker because of worsening violence, mass incarceration and other factors that have operated largely outside of their control.

“West Side Story” harks back to simpler times, with less polarization and violence. Perhaps it could also assist in revising what we know about gangs and reforming some of our more punitive impulses to respond to them.

More from MOVIESMore posts in MOVIES »