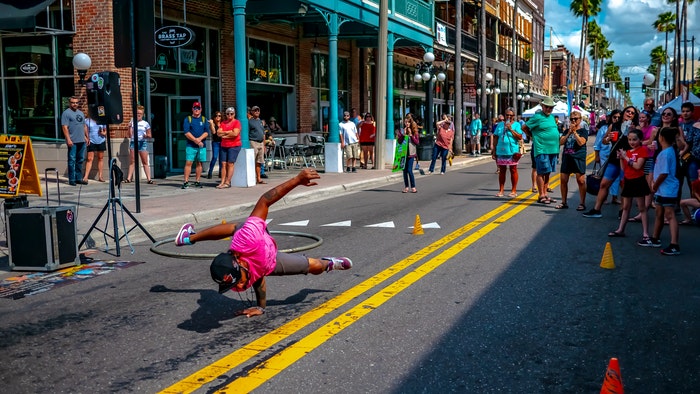 A philosopher explains why dance can help pandemic-proof your kids

“Ring around the Rosie, a pocket full of posies, ashes, ashes, we all fall down!”

I grew up singing that refrain in the 1970s in New York City’s East Harlem neighborhood, holding hands with other children while skipping around in a circle before we’d all wind up laughing and cross-legged on the ground.

I didn’t know then, and was not to learn for many years, that the Mother Goose rhyme and its accompanying dance, sprang from London’s Great Plague of 1665. The tragic origin of that joyful childhood routine suggests that dancing in the face of tragedy can signify the affirmation of life and resilience in the face of struggle, death and despair.

Many years later, I was still dancing, both socially and as a student at a performing arts high school. My classmates and I would dance in the street, in Central Park – wherever and whenever we could. These were scenes straight out of the movies, Broadway show and TV series “Fame,” which our school inspired.

Later, I studied law and philosophy. Eventually, through interdisciplinary work in dance studies as well as philosophy, I discovered that dance is good for people as individuals, as well as for society as a whole.

Dance is good because it expresses human nature – it’s not just fun, although it is certainly fun. It’s not just exercise, either.

At its best, dance is an extension and expression of who we are as human beings in ways that can allow us to share emotions that increase our sense of community and connection. This is why, in good times and bad, in times of war, slavery, fleeing homelands and during pandemics, kids still bounce, leap and spin.

An outlet for natural impulses

The idea that something is good when it is part of helping human beings to flourish comes from Aristotle, the ancient Greek philosopher.

Dance helps children to flourish because it is an outlet for their natural impulses that has emotional and social benefits. As the philosopher of dance and religion Kimerer LaMothe has explained, a desire to dance and to move your body is the beginning point of all human life.

Soon after babies come into the world, they begin to move. This is readily apparent when observing toddlers and young children, who have a natural energy and joy and a love of exploring space and the world around them.

What this means is that when parents allow or encourage their kids to dance they are just stoking something that is already natural to them and that they often already like.

Plato, who was Aristotle’s teacher and is widely considered the father of Western philosophy, advocated that dance training be used for the civic education of children, for both health and citizenship reasons. But dance training need not be formal to benefit kids.

I’m glad to see so many kids finding ways to dance together during this COVID-19 pandemic. As a college professor I can see blank and pale faces in required Zoom classes as my students slump in their childhood bedrooms or in empty dorms.

They are either alone, as is the case for the foreign students who remained in the U.S., or back with their families – and may be experiencing an array of stress brought about by social isolation, economic distress and illness.

Many may just want or need to dance it out.

My daughter, for example, belongs to one of Dartmouth College’s dance teams, Ujima. She and her teammates have kept up both rehearsals and flash performances through social media platforms like Instagram and YouTube. Rehearsing, she tells me “is one of the few things keeping me sane and connected to my friends right now.”

Another thing I think is keeping them and their peers sane is TikTok. The short video app that features many dance challenges has gained more popularity during the COVID-19 pandemic as kids of all ages have struggled with isolation away from their school friends.

The most popular TikTok dancers, such as Connecticut teen Charli D’Amelio whose dances have been downloaded more than 2 billion times, are those who seem real and friendly – and are performing simple dances that anyone can learn.

Dance for kids today, I believe, is about friendship, caring and connection.