If you’ve never read one of Anthony Bourdain’s books or watched one of his wonderful travel documentary shows, spend a few nights learning more about the world around us though his exciting journeys on this, June 25, #Bourdain Day.

At the end of May, illustrious chefs Eric Ripert and José Andrés posted a call to action on chef Ripert’s Instagram page:

On this day we will celebrate the Life, Legacy & Birthday of our Dear Friend Anthony. Wherever you are & whoever you’re with, on 06/25 join @chefjoseandres & I by taking a moment to post & share your tributes & memories of Anthony using #BourdainDay & wish him Peace, Love and a very Happy Birthday on his journey”

June 25 is the birthday of Anthony Bourdain, the chef, writer and travel documentarian who took his own life on June 8, 2018. Since then, there have been tributes galore, including a book from CNN, “Anthony Bourdain Remembered,” “a moving and insightful collection of quotes, memories, and images celebrating the life of Anthony Bourdain” and an Anthony Bourdain Food Trail in New Jersey, the state in which he grew up, for the most part. His graphic novel, “Hungry Ghosts,” is being made into an animated TV series, too. Chefs all over the country are creating special dinners in his name.

If you’ve never read one of Anthony Bourdain’s books, now’s the perfect time to pick up one of his cookbooks or memoirs and if you need to catch up on one or many of his wonderful travel documentary shows, spend a few nights learning more about the world around us in his exciting journeys. Here are a few of the books and shows that are part of his legacy:

The many books and travel shows of Anthony Bourdain 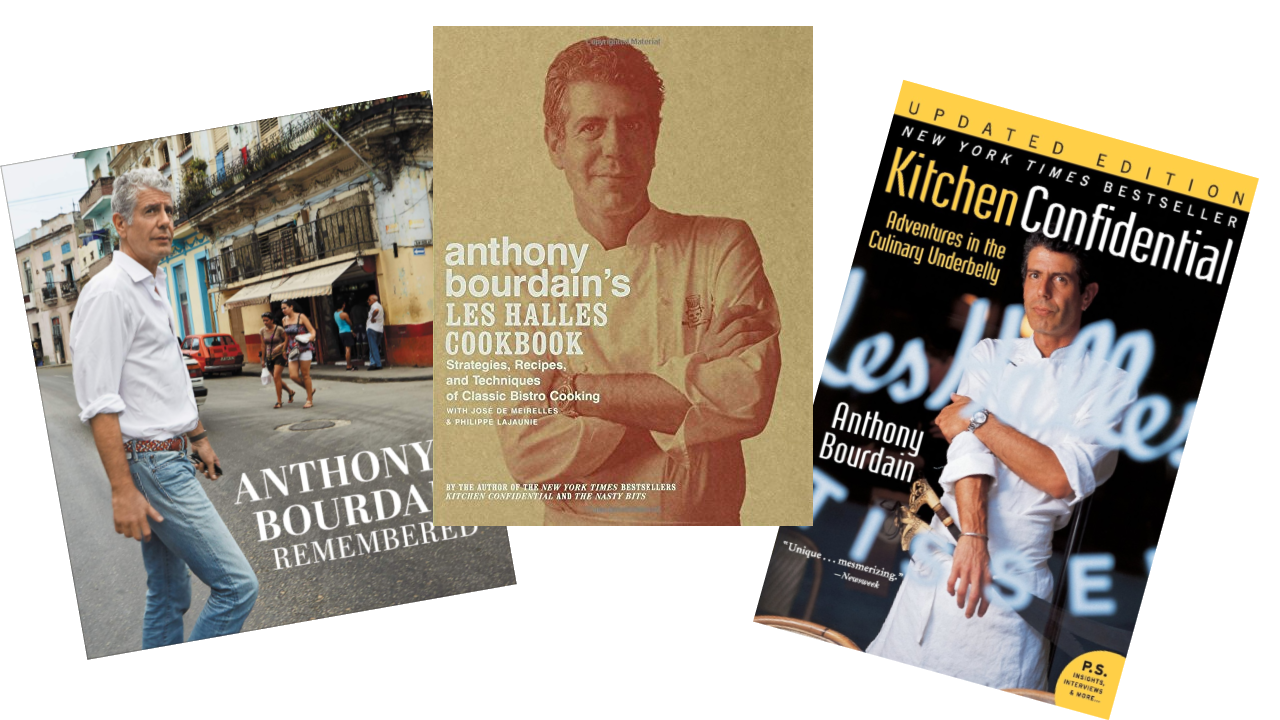 We know him best for his memoirs, however. “Kitchen Confidential: Adventures in the Culinary Underbelly (2000)” blew the lid off of what it’s like to work in the line in a busy NYC restaurant. Others followed, including “A Cook’s Tour: In Search of the Perfect Meal” (2001) and “No Reservations: Around the World on an Empty Stomach” (2007). His final cookbook, “Appetites: A Cookbook (2016)” “boils down forty-plus years of professional cooking and globe-trotting to a tight repertoire of personal favorites—dishes that everyone should (at least in Mr. Bourdain’s opinion) know how to cook.” Find more of his books and some from his friends here.

Many got to know Anthony Bourdain from watching is travel and food shows including A Cook’s Tour on the Food Network in 2002. That was followed by No Reservations on the Travel Channel in 2005. The last series was Parts Unknown on CNN. He was filming the series when he died. Show your love of all things Bourdain with this collection of t-shirts and hats, too.