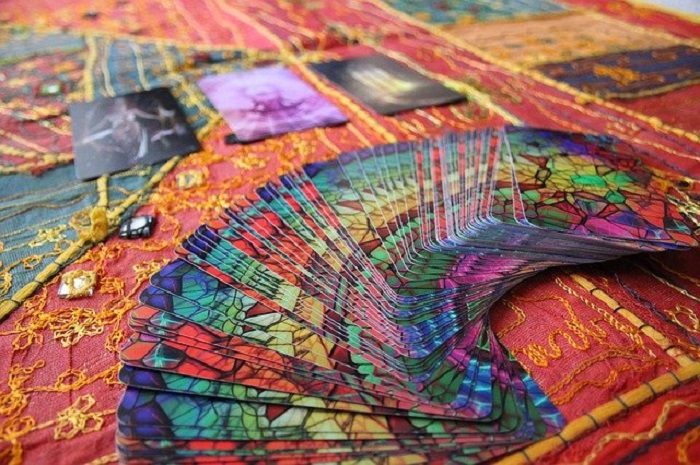 True History Of Tarot – Are You Sure You Want To Know

Ten Things You Didn’t Want to Know About Tarot

Do you like Tarot because of its aura of mystery, for its esoteric history, or because of its magical qualities? If you think Tarot is special because of one of those reasons then you are not going like what I have to say in this article.

I’m going to be looking at the true history of Tarot, and my research on this has brought me to conclusions which are different to what most of you will have read online, and they are perhaps different to what you want to believe are the facts behind Tarot.

I have enjoyed using Tarot cards for over 25 years, and I love Tarot symbology and Tarot divination, but I do not like it when unenlightened people create a fictitious romantic/mystical history for these cards.

I’ve put together the top ten pieces of information that I feel Tarot readers should know about Tarot’s origins. This data has been gleaned from art historians, card collectors, and my own research in museums and libraries.

For those of you who like the idea that Tarot is a magical or mystical tool that has been handed down from Egyptian times, or even from the times of Atlantis — I’m sorry, but there is absolutely no proof of this. Not only is there no proof, but when you look at the earliest known Tarot cards and look at how they came into existence, there isn’t even any remote possibility of a link with Egypt or the mythical Atlantis. I hear you saying, “But I’ve seen cards that have Egyptian designs or symbols on them!” And you may have, but these are later additions to Tarot’s artwork, and the images that Tarot is based upon do not have any Egyptian designs or symbols on them.

The earliest surviving Tarot cards are hand painted decks that were made in Italy, around the year 1441. They were made for the court of Filippo Maria Visconti, the Duke of Milan (from 1412 to 1447) and these cards are known as the Visconti-Sforza Tarocchi. This name was given to them because that was the name of the families for whom these cards were created. We know this because the heraldry of these families was included on the cards themselves. Depictions of family members are also used in the cards.

The suits of the Tarot as we know them are quite different to the original ones. The suits of Tarot are derived from Islamic playing cards which were Coins, Cups, Swords and Polo Sticks. The game of polo was very important in the Islamic culture, but was not known in Europe when the cards arrived, so the suit of Polo sticks eventually became known as the suit of Staves or Batons. In Italy and Spain, playing cards have retained the suits of Batons, Coins, Cups, and Swords.

The Tarot suits as we know them evolved from those Islamic playing cards, and various occultists over the years changed the original suits to make the Tarot seem more magickal or mysterious. The Sticks/Batons/Staves were changed to Wands, and the suit of Coins was changed to Pentacles.

For many years there has been a theory that the Gypsies had brought Tarot to Europe, and this notion has unfortunately become an accepted “fact” in the story of Tarot. However, we know that the Gypsies arrived in Western Europe in 1417, but playing cards were known in Catalonia, a region in North Eastern Spain, by 1370, so cards arrived 47 years before the Gypsies. And in historical records, Gypsies are referred to only as palm readers, there is no mention of them using cards for fortune telling until 1891. And even then the cards they refer to are standard playing cards, not Tarot cards.

Tarot was not designed as a way of hiding esoteric information from the ignorant or from invading nations. There are many references to Tarot during the 15th Century, and all relate to Tarot as a game, it is never mentioned as having been used in any other form during that time. It was designed as a game and no esoteric connections, nor fortune-telling properties, were attributed to it until many centuries later. The most likely reason for its invention was that the Duke of Milan (Filippo Maria Visconti) wanted a variation on the standard playing card deck that he had been using. He asked his artist Bonifacio Bembo to create an extension of this game.

The images of the cards in the modern Tarot are similar in some ways to the original Tarot cards that Bembo created, but there have been quite a few changes. Over the years the pictures on the cards have been altered by occultists in order to make them seem more magickal or mysterious. A good example of these changes is in the card known as The Fool. Rather than being shown as a naive, trusting soul who was traipsing around the countryside with his faithful dog, he was originally depicted in rags, looking quite miserable. He was thought of as the lowest of all within the physical realm. He was the classic “village idiot”. The card called The High Priestess used to be known as The Popess, The Heirophant was once called The Pope, The Hermit used to be known as Hunchback or Father Time, The Hanged Man was The Traitor, and Judgement was known as The Angel.

The Major Arcana cards are based upon Christian principles, not on esoteric or magical knowledge. For the Major Arcana, the artist, Bembo, decided to utilise an allegory of religious teachings that could be easily displayed in a series of pictures. If you look at sources from the 15th and 16th centuries, and some of the early decks that list the trump cards in a sequence, you will see a distinct pattern emerge. This pattern shows the physical realm as the lowest form of existence, and then shows the path of Christian spirituality leading all the way to their God. The final card in the Major Arcana is the World card, and an early writer on the subject described this final card as “The World, that is, God the Father”. The terms “Major Arcana” and “Minor Arcana” are relatively recent terminology. Paul Christian, an occultist from the 1800s introduced these terms to the Tarot. Once again, these terms were given to the Tarot in order to make it seem more magickal and mysterious. The word Arcana means mysterious, or secret, and by bestowing upon the cards these Latin titles, it was imbued with a mystical quality that was never intended by the original designers of the game.

Some occultists consider that there is a direct link between the 22 paths of the Cabala to the 22 Major Arcana. Pico della Mirandola was the person responsible for introducing the Cabala to Western occultists, but he did this more than 40 years after Tarot cards had been in existence, so the Tarot images were definitely not based on or linked to this Hebrew alphabet and system of magic. If Cabalists had invented the Tarot, the earliest known cards would have Hebrew letters on them; and they would not have used images such as Death, or the Devil, or pictures of any women on them. Jewish Cabalists did not like images of that nature, nor those of the human form, as these were forbidden by the First Commandment constituting “graven images”. And conversely, Tarot does not feature in any way within Cabalistic literature. The Tarot is not descended from Jewish culture, and Jewish Cabalists today do not recognize Tarot as being any part of their beliefs.

1) Occultists conveniently overlooked some basic ideas about the Cabala to better suit their theory about a link between the two subjects. For example, cards such as The Pope and the Last Judgement are obviously Christian based, not Hebrew.

2) When designing a Tarot deck, occultists often implanted supplementary symbols within the Tarot card images to suit the Cabala. For example, Lévi introduced the “elemental” suit signs on the table of the Magician to show that this card represented “first matter” — the elements being the basis from which all things were composed.

3) Occultists often rearranged the order of the cards to better fit their theories. The Golden Dawn interchanged Justice and Strength in order to conform to the Hebrew letters and correspondences.

4) With archetypal imagery such as the Tarot, it is not too difficult to see one system of esoterica as similar to another system.

In 1778 Court de Gébelin and the Comte de Mellet were the first to suggest a link between Tarot and the Cabala, and this was picked up and expanded upon by Lévi, an occultist of dubious researching abilities. But because of Lévi’s high reputation in the magical world of that era, the association between Tarot and the Cabala was simply regarded as a fact from that point forward, with no-one bothering to check if he was right or not!

Elemental associations with the four suits are another later invention of the occultists and were not part of the original Tarot concept. Eliphas Lévi gave Tarot the associations that are commonly accepted in most Tarot books today: Batons/Wands = fire; Coins/Pentacles = earth; Cups = water; Swords = air.

Conclusion: The evolution of Tarot is a jig-saw puzzle of information with pieces coming from scattered directions, and it is derived from many cultures and from many minds.

When you think about Tarot, I’d like you to remember that there are two main types of Tarot decks, and they are very distinct from each other. We have the historical Tarot, which was simply designed as a card game, and now we have the modern Tarot, which has been derived from and has evolved from the historical Tarot. The early Tarot did not have any mystical or magical qualities associated with it. The Historical Tarot was an invention of the 15th Century and was based upon the cultural and historical and religious expressions of its time — nothing more, nothing less.

Modern Tarot does have esoteric and mystical associations, but only because it has been placed there over the last few centuries, not because it is linked to some ancient source of secret knowledge. In writing all of this, I’m not trying to belittle Tarot or its heritage. I am just trying to add a rational voice to the unreasonable accounts that some people attempt to pass off as the “history” of Tarot.

The modern Tarot has become a powerful series of mystical images that can legitimately be seen as a spiritual journey. It is filled with magical, esoteric symbols and archetypes, making it a playground for the imagination. This is brilliant! This is an important part of Tarot’s place in today’s world. However, when people promote a fictitious history simply to boost the mystique of a subject, it undermines the value of its true nature when the truth is finally revealed.

The true story of the evolution of Tarot is just as interesting as the fabrications. The real version may not seem as magical or mysterious as its counterpart, but it is still fascinating. When you see an article that tells of Tarot’s “mysterious and obscure” origins, please delve deeper; you’ll find that the author hasn’t bothered doing any serious research on the subject.

For a free Tarot e-book called “Ten Reasons Why People Find it Hard to Learn Tarot and How You Can Overcome All of Them”, see http://MisterTarot.com.

More from ASTROLOGYMore posts in ASTROLOGY »